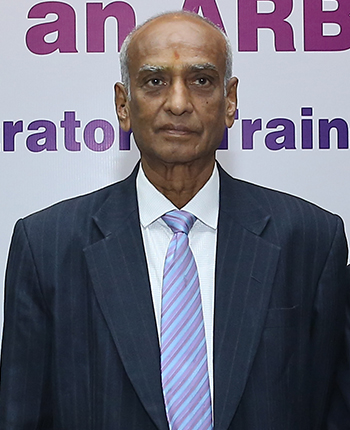 Justice E. Padmanabhan retired as Judge of the Madras High Court on 14.12.2003 and has been effectively practicing arbitration in the capacity as an Arbitrator/Presiding Arbitrator in various international and domestic matters

Justice E. Padmanabhan, after graduation and graduation in Law, with Post-Graduate Diploma in Company, Banking and Insurance Laws and Post-Graduate study, admitted to Madras Bar and started practice during 1966. He held the Office of the Secretary, High Court Rules Committee.

Specialized in Writs, on Appellate Side and Original Side of the High Court. Standing Counsel for various local authorities, Corporation, Banks and Institutions. Made inroads in both Central and State Administrative Tribunals by undertaking service matters. Specialized in Administrative Law.

In the height of profession, was designated as Senior Advocate during January 1994 by the High Court.

Elevated as Judge of the Madras High Court on 19.12.1996 and delivered many landmark judgments. To name a few, writ petition challenging the constitution of Special Courts to try corruption cases against political bigwigs and administrative heads; permitting women employees to work during third shift by providing work safety measures; directing the transport authorities to grant permit to transport operators to ply mini-buses in villages, the recent decision indicating the powers of the Speaker of the Legislative Assembly., Arbitration and exercised judicial review in respect of State functions and Legislative Assembly. Functioned as Company Court Judge and disposed innumerable number of company cases. Decided thousands of cases under the Electricity Act and the Electricity Supply Act.

Associated with the Green Bench of the High Court for three years and also exercised suo motu powers of judicial review in hundreds of writ petitions, in environmental matters, presided over Division Benches.

In addition to the regular work as Judge of the High Court, functioned as

Took keen interest in legal Aid to Poor, Legal Literacy to mass, and instrumental to release of Manual. He delivered lectures in The State Judicial Academy in respect of few topics for State Judicial Officers, including – Art of writing judgments, attended various State, National and International Level Conferences on Environment, Consumer Protection and Intellectual Properties. He retired as Judge of the Madras High Court on 14.12.2003

Appointed as Arbitrator by The High Court, Neyveli Lignite Corporation and Visakhapatnam Steels etc, L &T and various other Public Sector Undertakings and Corporations as Arbitrator/Presiding Arbitrator and also in other international and domestic matters.