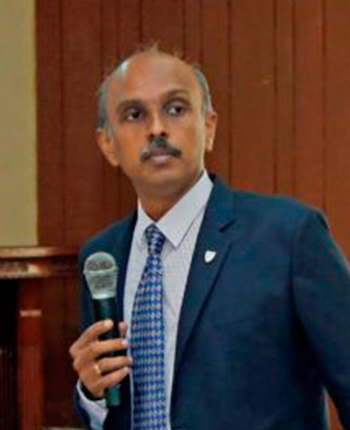 V.Inbavijayan was educated at Dr.Ambedkar Govt. Law College, University of Madras. On completion of his legal education, he took up litigation practice at High Court of Madras (1997). His enthusiasm towards ADR made him to pursue whole time arbitration practice since 2001. He is currently the Managing Partner at KOVE Global.

He has been accredited as an arbitrator in HKIAC, CIETAC, RCAKL, CRCICA, ICADR, ICA, CIDRA and various other regional & national arbitration institutions. To add up, he is a co-founder and former Secretary of an arbitration institution, CNICA and inducted as member of ICCA. He is an Approved Tutor for all courses/modules of Chartered Institute of Arbitrators, UK and had been listed in the 2008 edition of International Who’s Who of Commercial Arbitrators. Chambers Asia Directory has continuously listed Veeraraghavan Inbavijayan for five consecutive years since 2009 in Dispute Resolution and Arbitration and was recently listed in Indian Lawyer 45 under 45.

In addition he is promoting the concept of ADR by way of writing articles and books, providing training courses and gives lecture on Arbitration and ADR in law schools, Universities, Chambers of Commerce and conferences worldwide.